A famous duel took place on Boston Common in July, 1728. It may have been the first duel in English America in which a person was fatally wounded. Benjamin Woodbridge, age 19, was stabbed to death with a sword. His marker is on the front left side of the graveyard under a tree. It can also be viewed from Tremont Street through the wrought iron fence. Here is an account of the famous duel (edited):

"Early in the morning of July 4, 1728, Boston was startled by news that a fatal duel had taken place on the Common the night before. Benjamin Woodridge, 19 years old, a merchant of the town, had been found dead. Henry Phillips, with whom he had fought, was missing. By noon the town [water] pumps and principal street corners were plastered with a proclamation of the Acting Governor, William Dummer, ordering Phillips’ arrest.

It was known in the town that the two young men had quarreled. Some said "cards and wine" and pointed to the old Royal Exchange Tavern, in King [State] Street. Others whispered that "a woman is at the bottom of it." But, whatever had been the cause, these two who had long been friends were stirred to such enmity that only a passage at arms could satisfy wounded honor. 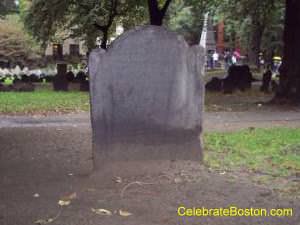 On the same day that the body of Woodbridge was found, the authorities rounded up all persons who in any way could throw any light upon the case. Bit by bit they pieced together the tragedy.

It was about 7 o’clock in the preceding evening when young Woodbridge called at the White Horse Tavern, on Washington Street [then called Newbury Street], near the corner of Avery Street [then called Coleburn's Lane], and asked for Robert Handy, who seems to have been custodian of the weapons for one of the military companies of the town. Of Handy, Woodbridge demanded his sword.

"I asked ye reason," said Robert Handy, according to the record of his testimony at the inquest, "he replied he had business [that] called him into the country. I was jealous he made an excuse. I urged him to tell me plainly what occasion he made for a sword, fearing it was to meet with Mr. Henry Phillips, who had lately fell out. He still persisted in his first story, upon which I gave him his sword and belt.”

Woodridge then left the tavern and set out in the direction of the Common, probably going up Hog Alley.

"I immediately followed," said Handy, "and went into the Common, found said Woodridge walking the Common by the Powder House [on the hill where the Soldier’s Monument now stands], his sword by his side. I saw no person save him. I againe urged the occasion of his being there. He denied informing."

"In some short time Phillips appeared with his sword by his side and cloke on. I told them I feared there was a quarrel and what would the events. They denied it.”

They did not deny, however, that they desired to be alone [and] told Handy that they would thank him to clear out. So he went "up the Common" toward the present Park Street, while they went "down," presumably to the level ground at the corner of Beacon and Charles Streets.

But Handy, "justly fearful of their designe," and hoping to prevent their "fiteing with swords," soon returned to the Powder House.

"I first saw Mr. Woodbridge making up to me, holding his left hand below his left breast. I discovered blood upon his coat, asking the meaning of it. He told me Mr. Phillips had wounded him."

"Mr. Woodbridge beginning to faint satt down, and begged that surgeons might be sent for. I immediately went away, leaving the two together. Phillips presently followed, told me for God’s sake to go back to Woodbridge, and take care of him, till he returned with a surgeon."

But Handy, who shows up poorly at this stage of events, "did not care to returne." He left the dying man, and returned to the tavern and then with a companion, went off to keep a dinner engagement.

While Handy was telling the story of the tragedy to his companions at White Horse Tavern, Phillips appeared at the Sun Tavern, in Dock Square, seeking Doctor George Pemberton. They retreated to Pemberton’s house, where Phillips told of the dreadful occurrence. The doctor hastened back to the Sun for John Cutler, surgeon, and all three went to the Common to give aid to Woodbridge. But he could not be found. It was assumed that he had gone to his house.

"Mr. Phillips left us," said Cutler. “I bid him walk in Bromfield’s lane [now street]. We went to Woodbridge’s lodgings, and severall other houses, but heard nothing of him. Upon our return Mr. H. Phillips was at my house. I dresed his wound, which was across his belly and fingers. Mr Phillips shew a great concern and fear of having killed Woodbridge…. He said, could he think he was alive, he should think himself a happy man."

It is probable that several hours were spent in searching the wounded man in the houses and taverns of the town; for it was midnight or after before a part began to scour the Common.

The finding of Woodbridge’s body is told in a 1728 issue of New England Weekly Journal:

"About 3 in the morning, after some hours’ search, was found dead, near the Powder House in the Common, the body of Benjamin Woodbridge, a young gentleman-merchant of this place. He had a small stab, under the right arm, but what prov’d fatal to him was a thrust he received, under his right breast, which came out at the small of his back. The forefinger of his left hand was almost cut off at the uppermost joint, supposed to be done by grasping a naked sword....

The body was carried to the house of Mr. Jonathan Sewall (his partner), and, on Saturday [July 6th] was decently and handsomely interred, his funeral being attended by the Commander-In-Chief, several of the Council and most of the merchants and gentlemen of the town.”

When this account appeared Phillips was on the high seas. On leaving the office of Dr. Cutler he had gone to the Royal Exchange Tavern. There he met his brother Gillam, who in turn, called on his brother Peter Faneuil, the Great Boston merchant who a few later was to give the marketplace and hall which still bears his name.

While Faneuil hurried away with Phillips to get him under cover, Gillam Phillips arranged to have his brother taken off to the British man-of-war Sheerness, then lying between Castle and Spectacle Islands. The Sheerness was to sail at daybreak.

A heavy blanket of fog made navigation difficult; and it was almost dawn when the fugitive set foot upon the deck of the King’s ship. Yet it was fortunate fog [for] him. News of his flight having reached the authorities, an officer was sent off with a warrant for Phillips’ arrest. The officer could not find the Sheerness in the fog. And when the blanket was dissipated under the morning sun the man-o’-war was headed out to sea.

Phillips was sent to Rochelle, in France, where he was received by Jean Faneuil, Peter’s brother. There he died about May 20, 1729, less than a year after the duel.

The duel, believed to have been the first duel in America in which a man was killed, gave rise to a new law, which decreed that any person fighting in a duel "should be carried publicly in a cart to the gallows, with a rope about his neck, and set on the gallows an hour, then to be imprisoned for 12 months without bail." A person killed in a duel was denied Christian burial and interred "near the usual place of public execution with a stake drove through the body." Death was the penalty meted out to the survivor.

[Some letters relating to Henry Phillips have been digitized by Harvard Law School.]