Just to the west of the Massachusetts State House, stood the former home of patriot John Hancock. The house was built in 1737, and torn down in 1863, to make way for a new wing of the State House. It is a tragedy that the building was demolished, as it would have been a historic treasure for the city, and a huge tourist attraction. John Andrew wrote about the home in 1857 (edited):

"Governor Hancock's house, on Beacon Street, fronts to the south and presents a quaint and picturesque appearance, embosomed, as it is, with shrubs, evergreens, trees, and flowers. It is built of hewn stone, and raised about thirteen feet above the street, with the ascent being through a garden. 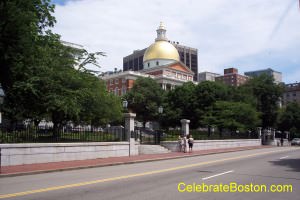 There it stands, beside its modern neighbors, like a venerable grandsire surrounded by his children's children, commanding respectful attention, and even admiration. The front is fifty six feet in breadth, and terminates in two lofty stories. Formerly there was a delightful garden behind the house, ascending gradually to the highlands in the rear. In Hancock's time we are told, that in front of the edifice a 'hundred cows daily fed' on the Common.

The home was a brave place for hospitality in olden times, when the east wing formed a spacious hall, and the west wing was appropriated to domestic purposes; the whole embracing, with the stables, coach-house, and other offices, an extent of two hundred and twenty feet.

There was also a glacis or incline, in the days when Thomas Hancock, the Governor's father, resided there; but garden, glacis, stables, and coach-houses, have long made way for streets and houses. The interior of the home is better preserved; and beneath its ancient roof reside the descendents of the Governor. It is a pity that it should ever be razed to the ground; but it is to be feared that, by and by, the place which it now knows, will know it no more." The house was demolished five years later.