The frigate USS Constitution was launched on Saturday October 21, 1797 from Edmund Hartt's shipyard in Boston's North End. It was a beautiful spectacle and memorable occasion for those who witnessed this historic event. The October 25, 1797 issue of the Columbian Centinel published at Boston, eloquently describes the launching of the ship that eventually became known as Old Ironsides:

"The spring tides the latter part of last week, giving the workmen in the Naval-yard, an opportunity to complete ways for launching the frigate CONSTITUTION, Col. Claghorn, anxious to give as early information as possible directed a gun to be fired, at day-light on Saturday morning last, as a signal that at full sea, he should move her into her destined element.

Before noon, a very numerous and brilliant collection of citizens assembled at the spectacle; — and at fifteen minutes after 12 — at the first stroke at the spur-shores, she commenced a movement into the water with steadiness, majesty and exactness, as to fill every breast with sensations of joy and delight, superior by far, to the mortification they had before experienced. 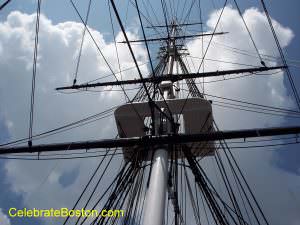 Such was the regular obliquity of the ways, that she come to anchor within two hundred yards of them, without the least strain, or meeting or causing the most trifling accident — And she now rides at her moorings in the harbour, a pleasing sight, to those who contemplate her as the germ of a naval force, which is no remote period of time, will protect the flag of the United States from the depredations of piratical marauders.

As soon as enlivening burst of gratulation was heard from the ship, here ordinance on shore replied to the shout, and, joined with the huzzas of the citizens on the adjacent shores, demonstrated the lively interest the great body of the people took in her safety; and evidenced the popularity by whose direction she was built.

The best judges have pronounced the CONSTITUTION, like her archetype to be a perfect model of elegance, strength, and durability: — And every individual in her construction appears to pride himself in having assisted at the production of chef-d'œuvre [perfection of work achieved of its kind] of Naval Architecture.

To Col. Claghorn the mood of general approbation of his skill, prudence and intelligence, has been freely bestowed — And the United States are under obligations of Gen. Jackson, Capt. Nicholson, and Major Gibbs, for their indefatigable care attention, in the superintendency of the various departments necessary for her equipment. If the well deserved fame of Messrs. Skillings, as Carvers, could receive an addition, we should pronounce their workmanship, which decorates the frigate, a masterpiece of theirs. — Indeed no part of their work in the hull or rigging can for strength and beauty be exceeded: and the eulogiums of foreign naval gentlemen have been warm and explicit to her favour.

May the 'hoary monarch' of the element [the sea], on whose bosom she now reclines, protect her with his trident, and whenever her departure into the waste of his realm may be necessary, may proptitious [favorable] breezes waft her to the haven of peace; or aid her to hurl the vindictive thunder of national vengeance, on the disturbers of our country's repose; or the depredators on the lawful commerce of our citizens.

The Constitution frigate draws 18 feet after, and 14 forward. Though rated only as a 44, she can be made conveniently to mount 64 guns.