Charles Sprague, the famous poet, is entombed at Central Burying Ground in Boston. The following is his obituary from the January 23, 1875 Boston Globe:

"The death of this venerable poet whose long and eminently useful life is so honorably identified with the literature of this country and with this city, where he has always lived, is an event of no common interest.

Considering his advanced years, it might be thought an exaggeration of sentiment to mourn over his decease, and the words of his friend Bryant, in deprecation of sorrow for one whose long life-work had been nobly done, naturally recur to our thoughts in connection with him. He had reached the age of eighty-four, and had so long been secluded from the world that to the younger generation he his probably little more than a name. 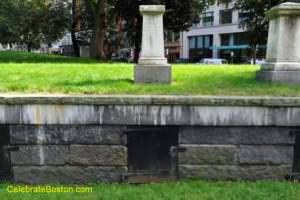 We can the better realize the position which he occupies towards our most distinguished living poets in point of time by remembering that he was three years older than Bryant, and only four years younger than the nestor of American poets, Richard Henry Dana, who was born a year before Byron. We are apt to consider Mr. Longfellow rather an old man and he did not come into the world till sixteen years after Charles Sprague entered it. This element of time is an important one in considering the life and writings of Charles Sprague, who was essentially a gentleman of the old school. Boston was a small place in his early life, and his connection with notable events of our anti-revolutionary days seems pretty close when we remember that his father [Samuel] was of the famous Tea Party.

When he was a lad, he lost an eye, but this affliction, like the similar one which occurred to the historian Prescott, did not impair his attention, either to study or business. In his youth, he had a place in a grocery store-– rather an umpromising position, one might think, for a poet, but when he afterwards went into business with the late Mr. Callender, he had shown the bent of his tastes by a careful study of the English poets. It was a good sign of the enterprise of a young merchant under difficulties that, for want of means to have the name of the firm painted, he himself depicted himself it in glowing colors.

As early as 1814, he made the first contributions to the press as a writer for the Saturday Evening Gazette, the title of which he suggested, and which, during the sickness of its founder, Mr. Burdick, his brother-in-law, he edited. In fact, the very first number of the paper had a poem from his pen signed Carolus.

But the grocery business proving unprofitable, Charles Sprague accepted a position in the State Bank as giving him more time for the cultivation of his literary tastes. These he showed in various ways, proposing while Vice-President of the Boston Debating Society a sentiment to the memory of Byron which made his name widely known, and writing an inscription for an arch on the occasion of Lafayette’s entry into Boston, which, when it was pointed out to him by Mayor Quincy, drew tears from the eyes of the gallant Frenchman.

But it was the dramatic addresses that he made his first brilliant literary successes, and of the six prizes which he gained for efforts of this kind, the one obtained from the Committee of the Shakespeare Festival, held at the old Federal Street Theatre, in January 1824, was peculiarly welcome from the eminence of the committee making the award, among whom was George Ticknor, Jared Sparks, Washington Allston and William H. Prescott.

When the Globe Bank was started, in 1825, Mr. Sprague’s reputation as a careful financier secured for him a position as its cashier, which he filled with ability and faithfulness for forty years. It was in allusion to this connection that Mr. Waterston referred to the encouraging fact that a poet’s name could be found on the bills [currency] of a bank which would endure as long as the globe should stand.

Charles Sprague’s intellectual power were shown not merely in his collected works, three editions of which have been published, but in the force and beauty of his observations, alike in conversations and debate. Few men had such stores of information, or were able to impart it with such readiness and felicity. Some of his poems have a high place in standing collections, and all of them are marked by vigor of thought and grace and elegance of style.

It was fitting that the poet of humanity and the eloquent orator whose Fourth of July address, fifty years ago, touched the high water mark of productions of this kind, should have received from Harvard a degree which was creditable to its appreciation of his services to literature. Yet he did not neglect his duties of the citizen, and his services in the City Council and Board of Aldermen in early life attested his interest in the cause of good government.

Charles Sprague was faithful indeed in all the relations of life, and although he seldom went beyond the limits of his native city and was never in a steam railroad car, his mind and heart went out to every noble cause that claimed the homage of his respect and sympathy. None who have ever met him can forget his cordial greeting, the freshness of his feelings and the cheery animation of his familiar conversation, enlivened as it was by singular keenness of reflection and rare wealth of information. He has passed away in the fulness of years, leaving behind him an honored reputation and a precious memory.