"Richard Bellingham (1592-1672) was a colonial lawyer, magistrate, and governor of the Massachusetts Bay Colony.

Bellingham arrived in Massachusetts in 1634, and immediately fixed his residence in Boston. He had the character of a sincere Puritan in England, and often appeared in public as an advocate for their cause.

When the Massachusetts Company was first formed in England, in 1628, and applied for a charter, he aided them in obtaining it. He had a high reputation for probity, and proved himself a most upright ruler and magistrate. His profession was the law, and he must have been very useful in the early days of the colony. 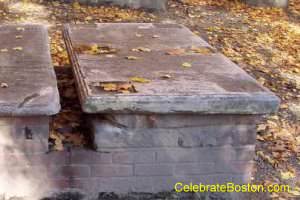 In 1635, he was the Deputy Governor under John Haynes, who was Chief Magistrate that year. After the death of John Endicott of Salem, in 1644-5, he was chosen Governor, and continued in that position for several years. He was a zealous advocate for civil liberty, and for the exercise of the political power granted by the charter.

When the commissioners of Charles II came into the colony, to exercise high judicial authority over the government, he was among their opponents, and denied their right to interfere between the government and the people, as being repugnant to the authority of rulers and judges here, chosen or appointed.

It may be justly said of Bellingham, that he was a suitable Governor for Puritans and Republicans. He was of exemplary morals; conscientious in public political affairs, as well as those in which were private and personal.

A strange story about Bellingham, is that he once married himself; that is, he presided over his own wedding to a much younger woman.