The 19th annual Radio 929 EarthFest took place on Saturday May 19, 2012. It was by far the largest crowd for the EarthFest, with 125,000 or more people visiting the Esplanade for the very popular music festival and earth-friendly product exhibition event. The line up of performers included Twin Berlin, Eve6, Switchfoot, Spin Doctors, and Third Eye Blind. The weather was perfect at about 80 degrees, with not a cloud in the sky for 7 hours.

Thousands and thousands of people walked the Esplanade to see the performances or visit the many product demonstration tents and family entertainment exhibits. There were product canopies on the Esplanade island, and for the full length of the Boston side of the Charles River embankment. Pedestrians strolled past the canopies for several hours. From the Hatch Shell westward, the Esplanade was nearly full, with people arriving on bikes, kayaks, and even sailboats to listen to the music and check out the scene. 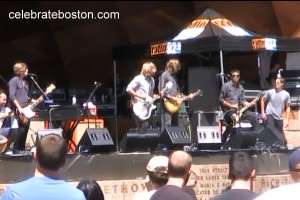 The Radio 929 EarthFest is a huge product display venue as well as a music festival. Whole Foods had a large tent to showcase the company’s certified organic foods, vegan choices, and green products. A lot of people were wearing Whole Foods yellow backpacks filled with samples that were distributed from their tent. Many other earth-friendly products were displayed including an electric car, a hybrid MBTA bus, solar products, organic foods, low-calorie foods, juices and drinks, as well as many other healthy lifestyle products. There were also volunteer recruiting exhibits, recycling displays, and many information booths.

Local band Twin Berlin warmed up the crowd, and then Eve6 performed. Eve6 pounded out a steady bass and got the crowd primed for the rest of the afternoon. Among their hits they performed Inside Out, and Here's to the Night, and the crowd joined in singing. For history buffs, Eve6 got its named from an X-Files episode called Eve in which cloned children were numbered. Eve #6 bit the eyeball of a security guard, which inspired band members to assume this name.

Switchfoot attracted several thousand college students that created standing-room only viewing in the first third of the Hatch Shell lawn. The lead singer climbed the barricade and sang for a time which got the crowd waving their hands and singing. They performed two Beastie Boys cover songs in honor of Adam Yauch, aka MCA, who had passed away a week earlier, which was a surprise. Switchfoot closed their set with their big hit Meant to Live, and a couple of young crowd surfers even briefly made an appearance on the lawn for a few moments. A cloud of pot smoke filled the air during the Switchfoot set, which was a first for any EarthFest in Boston.

The Spin Doctors hammered out their signature bluesy style rock, performing their huge hit Little Miss Can’t Be Wrong as their third song. They also sang their hit Little Princes which got the crowd jumping and dancing. Lady Kerosene and Margarita were also performed. Lead Singer Chris Barron was quite animated, dancing around the microphone, and kicking his feet up over his head which was very entertaining.

Top-biller Third Eye Blind performed many of their hits including Jumper, Motorcycle Driveby, Feel So Close, and of course Semi Charmed Life. During Semi Charmed Life the crowd was really into the soung, with thousands of people waving one hand in the air to the beat of the bass. There were a number of women screaming out loud during the song which was also very cool.

Another GREAT EarthFest as usual! The main sponsors of EarthFest are Radio 929, Whole Foods Market, Subaru of New England, MetroPCS, RCN, and Mass DCR. Nantucket Nectars and Vitamin Water are repetitive sponsors, as well as many others.