The 20th annual Radio 929 EarthFest took place at the Esplanade on Saturday March 18, 2013. A crowd of about 75,000 enjoyed the popular local music festival at the Hatch Shell, and also perused the many vendors that showcase a multitude of earth-friendly products and services. A great line-up of bands pleased the crowd including Todd Biggins Band, Camper Van Beethoven, Fastball, Gentlemen Hall, Cracker, and Vertical Horizon.

The Radio 929 EarthFest is a huge public service. It's a free music festival that can now be considered in the same league as many long-standing folk or film festivals. Radio 929, Whole Foods Market, Suburu of New England, RCN, the Massachusetts Department of Recreation and Conservation, and many other corporate sponsors should be commended for hosting this event each year. 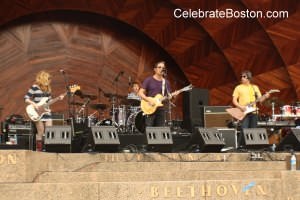 Noteworthy in 2013 is that the EarthFest occurred only a few weeks after the Boston Marathon bombings. A large crowd attended EarthFest 2013, proving that Bostonians are not intimidated by cowards, and that people were not inconvenienced due to heightened security measures. Security was very much like that of years ago when public consumption of alcohol was a huge problem, and it was also good to see more security with the economy still struggling and street crime on the rise.

The Kid's Planet area was bustling, with many children greatly enjoying the entertainment, and also having a lot of fun in a section which included a simulated tree house and zip line. The Free Sample lines were everywhere, as the EarthFest presents a rare opportunity to sample a variety of healthy products and literally spend several hours doing it. The Whole Foods Market Tent was popular as usual, with lectures and entertainment provided, and their famous free orange backpacks worn everywhere which have various healthy slogans printed on the back.

Many other vendors attended the Radio 929 EarthFest, including LL Bean and their Boot Mobile, SolarCity, which retrofits homes and businesses with solar energy equipment, and the MBTA, displaying a zero-emissions bus. There was also a huge "brick" of recycled soda cans of which people could guess how many cans comprised it. The spectators observing the giant block of cans was reminiscent of jelly-bean jar contests of bygone days.

Local band Todd Biggins Band began the festival after winning Radio 929's annual Battle of the Bands contest. Camper Van Beethoven was up next, with a retro-'80s sound that was pretty cool. They have performed at the Middle East in Cambridge, with the EarthFest being a larger venue for their sound. They performed the amusing song from the '80s called Take the Skin Heads Bowling, which reminded this author of the "Nazi Punk" song from '82 by The Dead Kennedies.

Fastball was up next, and got the crowd to stand up at the front of the Hatch Shell. Out of My Head and The Way got everyone cheering and ready for the rest of the concert. They also sang Ziggy which will be featured on an upcoming new album. What is very cool about all EarthFests is that before each performance, Amy Brooks of Radio 929 interviews band members which provides much insight into the roots of each band and what it is like to professional musicians.

Boston band Gentlemen Hall then performed and can be described as a sort of very talented boy-band. They likely will become a national sensation someday. The band used a number of instruments which was refreshing, including a keyboard and flute. It's hard to describe their sound, but it was sort of like Roxy Music meets Color Me Bad meets Deep Forest.

Cracker performed next and sang of lot of their big hits including Teen Angst and Low. This author's favorite song was Eurotrash Girl, which was a secret track on their 1993 album Kerosene. This was Cracker's 2nd appearance at the Radio 929 EarthFest, having performed in 2008.

The top-billing band was Vertical Horizon. They performed Everything You Want, The Lucky One, and Save Me From Myself. Lead singer Mike Scannell mused that troubled times in his younger days contributed to ending some relationships, but did help him write a few great songs. The band poignantly dedicated the song Forever to a soldier serving in Iraq who lost his friend, and also to the victims of the Boston Marathon bombings and citizens of Boston. Scannell has a great voice, and hit a lot of high notes while harmonizing with other members of the band.