In 1769, Elisha Brown and his family performed one of the earliest American acts of defiance against the British Empire. Brown was ordered to surrender his home by British forces so it could be converted into a barracks:

"Elisha Brown was an inhabitant of the southerly part of Boston, where he owned an estate of considerable value. In the year 1769, when the British soldiers held possession of the town, his house, a very commodious mansion, was selected as remarkably well adapted for the use of barracks, and he was peremptorily ordered to vacate the premises for their convenience. 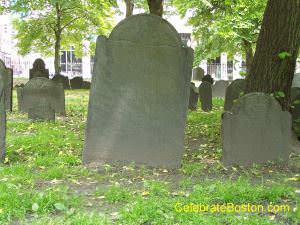 On refusing to comply with the demand of the soldiers, the house was surrounded by the troops, and kept in a state of siege.

It is said that for seventeen days he prevented the troops from gaining their wishes, he having barred all the windows and doors on the inside of the house, and relying for sustenance on the usual family stores which he had provided for family use, and upon the supplies which his friends from without, from time to time found opportunities to convey to him."

Brown died in 1785 at the age of 65. He was a true Son of Liberty. His marker can be found in the cemetery off the walkway to the left of the Franklin obelisk. The sign there can direct you to the marker's location. His marker states the following:

ELISHA BROWN,
OF BOSTON,
WHO,
IN OCT'R, 1769, DURING 17 DAYS, INSPIRED WITH A GENEROUS ZEAL
FOR THE LAWS,
BRAVELY AND SUCCESSFULLY
OPPOSED A WHOLE BRITISH REG'T.
IN THEIR VIOLENT ATTEMPTS
TO FORCE HIM
FROM HIS LEGAL HABITATION.
HAPPY CITIZEN, WHEN CALL'D SINGLEY
TO BE A BARRIER
TO
THE LIBERTYS OF A CONTINENT.